Automation and innovation for an efficient production line

Scaglia INDEVA®  has recently taken up the challenge of a well-known packaging machine manufacturer that needed a solution to automate transportation of components along their complex production line; the solution had to be fully compatible with industry 4.0 standards.

Scaglia INDEVA® developed an industrial automation project that proved successful and efficient: 26 automated guided vehicles, model Tunnel AGV that slide underneath large trolleys carrying parts and, through the pin-hook system, hook the trolley and carry it along the line; each AGV is scheduled to stop at each assembly station according to a pre-set takt-time and moves again at the end of the scheduled operations

Special processing and rework islands have been efficiently automated as well. Usually standard lines are composed of a ground catenary with a rigid system that cannot easily be adjusted to different production needs. The INDEVA® solution includes the Supervisor & Controller, a very important tool for industrial automation: it decides which AGV has to go to the rework island where accessories are added on the machine, depending on the order specifications of the machine it is carrying.

The INDEVA® Supervisor can communicate with the customer’s management system, from which it learns about the specifications of the machines on the production line and decides what station to use for each of them accordingly.

The Supervisor sees what rework station is free and sends there the AGV with the machine to be customized. Once the work on the custom machine is completed, the operator, through an interactive screen connected to the Supervisor, orders the AGV to go back to the standard line.

At the testing stations the operator, by means of an interactive program on his tablet, in case of any changes or modifications being necessary for a machine undergoing testing, can ask the Supervisor to send the AGV to a rework station. The Supervisor will determine which station is available at that moment and instruct the AGV to move there.

Once an Automated Guided Vehicle has reached the packaging station, it goes back to the start point.

The INDEVA® Supervisor, furthermore, keeps checking the status of each AGV (breakdown, running, stopping, waiting, inactivity, availability, battery) as well as the correct position of the machine being carried through 2 photocells placed on the lifting platforms; after checking the correct position, the Supervisor enables the platforms to be lifted: this system eliminates the risk for the machine to fall and relative time-wasting, so assuring safety and production efficiency.

The INDEVA® Supervisor knows the annual calendar and plans the AGVs according to the set weekdays, holidays and reduced working hours.

10 Wi-Fi connected screens along the production line communicate with the INDEVA® Supervisor, allowing each operator to control takt-time and to report any inconvenience in real-time by pressing a push-button. 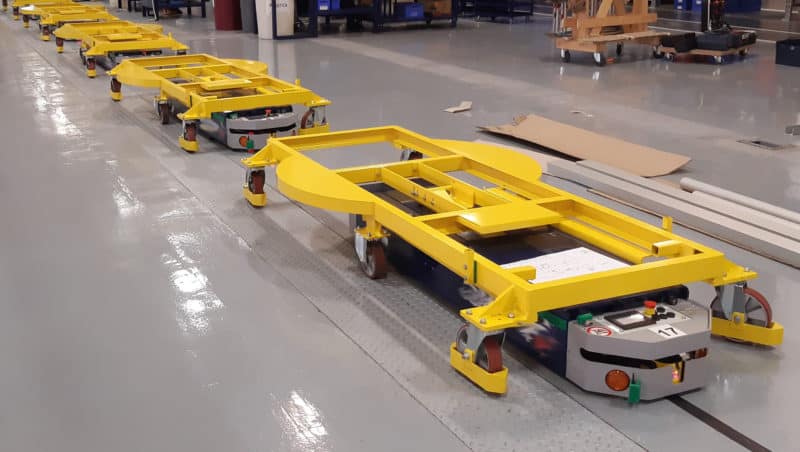 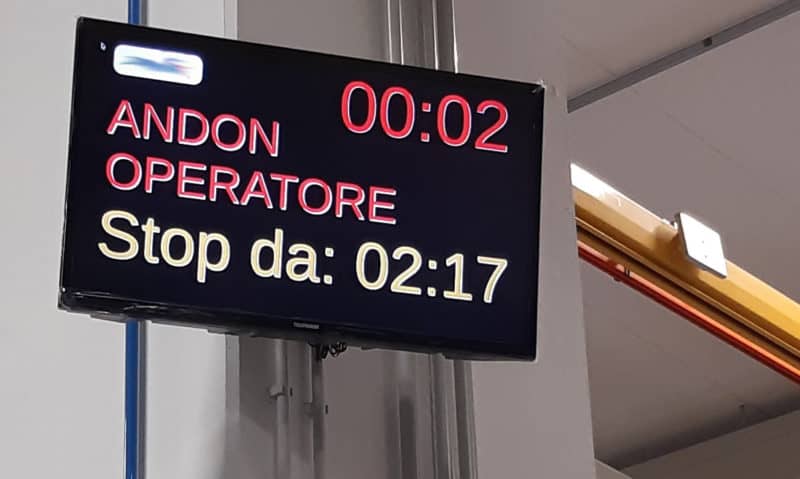